What a fantastic idea for either an appetizer or a side dish.

Potatoes make great comfort food no matter how you prepare them, so if you want something different from mashed potatoes, boiled potatoes, baked potatoes or fries, try loaded potato skins and you will be really impressed with them.

As an alternative dip to sour cream, you could try garlic mayonnaise, Thousand Island dressing or even barbecue sauce. These stuffed potato skins are always a hit with guests and they are simple to make. You can even do the same and try some grilled sweet potatoes instead of regular ones.

Serve them at a buffet or offer then as a side dish whenever you have your next cookout. They are quite filling so a couple of skins per person should be sufficient, or just one if you want to serve them as a light appetizer.

These are usually eaten with a knife and fork (especially if anyone does not want to eat the skin) but they can also be eaten as finger food if you offer a napkin with each one and do not mind the occasion morsel of potato on your floor.

Something else you might want to do is include one of these in a box lunch for your partner or for the kids. This is an unusual idea but potato is filling and these taste fine chilled. Wrap one in aluminum foil, pop it in a box lunch, and see what kind of comments you get later.

To make this crowd-pleaser, you need to microwave the potato skins until they are tender to prepare them for stuffing. Bake them in the oven if you prefer but microwaving is quicker so you might as well do them in there.

A rosemary-flavored butter goes all over the skins and then it is time to fill them with cheese, onion and sun-dried tomatoes to add an aromatic yet hearty flavor.

Cook them until the cheese begins to melt and then it is time to serve them. 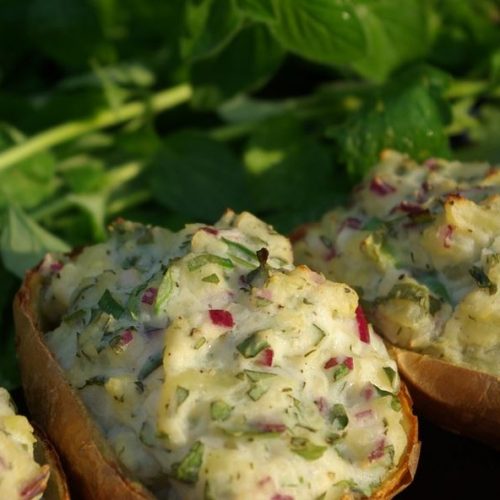 Loaded potato skins always make great appetizers and they are a favorite in many households. These are gently flavored with rosemary before being loaded with cheese, sun-dried tomatoes and onion, and any other morsels you care to put in the filling mix.
Print Recipe Pin Recipe
Prep Time 10 mins
Cook Time 15 mins
Total Time 25 mins
Servings 6

If you want to adapt the ingredients then go for it. You might like to add bacon or use ham, exchange the sun-dried tomatoes for jalapeños or the rosemary for basil or oregano. .

There are all kinds of little tweaks you can play around with in order to get these tasting exactly as you want them to taste, and you can have them spicy or mild, piping hot or pleasantly warm, and make any other changes you want.

Add a bunch of grilled mixed vegetables as a vegan alternative as a filling healthy meal.

This is part of the joy of preparing your own food instead of reheating something frozen out of a package which is never going to taste fresh or look particularly appetizing.